The condom men want to wear 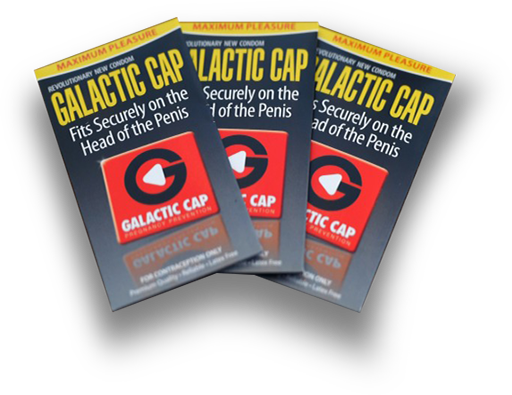 Come and get it

How Galactic Cap came to be

When was the last time the traditional condom design was updated in shape? Since the invention of the condom, the materials used have changed, but the shape sadly remains the same. We realized that there was an opportunity to invent a modern condom that people would want to use! And so our story began. In 2012 we designed, developed, and patented a revolutionary new condom called the Galactic Cap. It is the world’s first condom that fits safely and securely on the head of the penis, leaving the coronal ridge and shaft exposed for heightened sensitivity. The Galactic Cap was created to increase pleasure for both Men and Women. The G-Cap offers much more freedom and extra skin-to-skin contact during intercourse. Our goal is to increase sexual stimulation while ultimately boosting condom usage worldwide. Today, the Galactic Cap has partnered with California State University, Long Beach Engineering Department for research and testing of the product.

Watch How It Works

In preparation for a clinical trial and FDA approval, we are suspending test marketing orders in the US of the Galactic Cap effective immediately.

It was the finest condom experience I’ve ever had!

How It Works
Order Now

I agree and accept the following: This product is an experimental prototype and has not yet been tested by the U.S. Food and Drug Administration for use as a condom. Use at your own risk. It may not reduce the risk of transmitting STIs such as HIV infection (AIDS), Gonorrhea, Human Papillomavirus (HPV) and/or Herpes. Pregnancy prevention effectiveness has not been satisfactorily tested either. The medical grade adhesive of this condom has been cleared for use on skin. But different men have different skin sensitivities, so you should experiment with a small area first. If you find that the Galactic Cap is too painful or that your skin is becoming abraided, discontinue use and use a regular condom. By electing to use the prototype, you assume full responsibility for its use and understand that Powell Development Group, Inc., the manufacturer and any third parties (collectively “we”) can not be responsible for any damage or injury to you or your partner during use. Accordingly, you hereby release and agree to defend, indemnify and hold us harmless from any and all cost or damage arising out of or relating to the use of the Galactic Cap prototype.

I agree and accept the following: The latest adhesive for the Galactic Cap is aggressive so that it stays in place during vigorous sex. It is, however, approved by the FDA for use on skin. But, it is very important to follow directions during the removal after sex so that the process is easy and free of any discomfort. Best Method: Wait until you need to urinate. Go to the shower (or toilet). Apply baby oil to the head of the penis and the Galactic Cap. Urinate slightly into the G-Cap so that it blows up. Use the pressure of the urine to loosen the edges. Work the baby oil into the edges. Slowly peel off the G-Cap and dispose of it in the trash. Once complete, wash the penis with soap and water. Please Note: Any oil can be used in place of baby oil, such as olive oil or coconut oil so long as it is safe for use on skin. Remember to go slow, much like peeling off a band-aid or bandage. Hold the edge of the G-Cap with one hand while you hold the skin down near the separation point with your free hand. This avoids unnecessary pulling of the skin. Remember too, there is no hurry to remove the Galactic Cap after sex. It will stay in place and feel like your second skin. When you feel the need to urinate that is the perfect time to remove it. Any questions or concerns, please contact us immediately.